Don’t push your luck and end your sailing holiday in Croatia vacation early!

Avoid pushing your luck and ending your sailing trip in Croatia!

Let's begin with one of our most popular themes, particularly for bases in the Zadar sailing region, such as Biograd yacht charter base and Sukošan sailing charter base in Croatia: 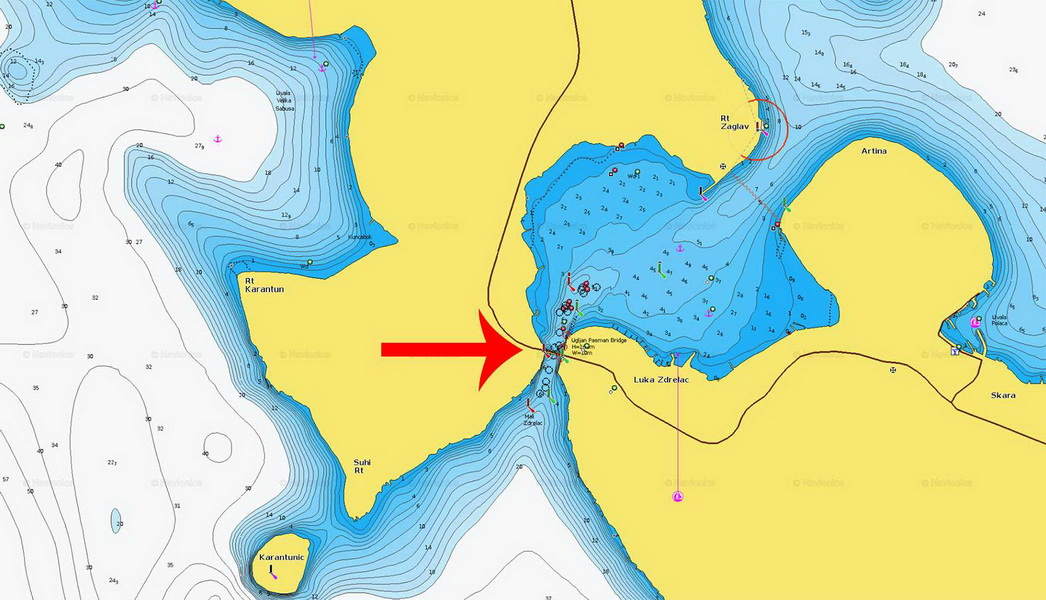 To be quite honest, we will repeat this post several times during the year's because it appears that people do not read or follow our warning/advice regardless of how many hazards we highlight and no matter how many risks we mention. In our FAQ section this question is answered very short and clear:
Q: Is passing 'Zdrelac bridge' allowed?
A: This is strictly forbidden for all boats, except Vektor 950, Bavaria 32 and Bavaria 33.

The channel beneath the bridge is large enough for one sailboat, and vessels entering from the southwest are granted the right of way. If you're unsure about the mast's height, there's no reason to take a chance and no need to push your luck to stop your sailing holiday in Croatia earlier or even before it started. Rather than that, turn north-west and circumnavigate/sail around Ugljan (17 Nm). The canal itself is intended for faster passage from Zadar to nearby islands and the Kornati archipelago, and "experienced" sailors attempt to take a shortcut between Pašman and Ugljan island in order to return to the charter base faster at the end of their sailing vacation in Croatia, or even at the beginning of their vacation in order to get faster out to nature Park Telascica, National Park Kornati Islands, or even Dugi Otok island, in order to avoid having to sail around one of those excessively long islands.

Ždrelac bridge is precisely 16,5m high at high tide; nonetheless, the Ždrelac channel has extremely powerful currents that make handling smaller boats problematic... So, as a result, we often advise against using that route, as the time and fuel savings are not worth the inconvenience and cost associated with it. Thus, despite the fact that the bridge bears a sign indicating its 16.5-meter height and is well-marked on marine maps and nautical charts, this occurs more frequently than one might believe possible. 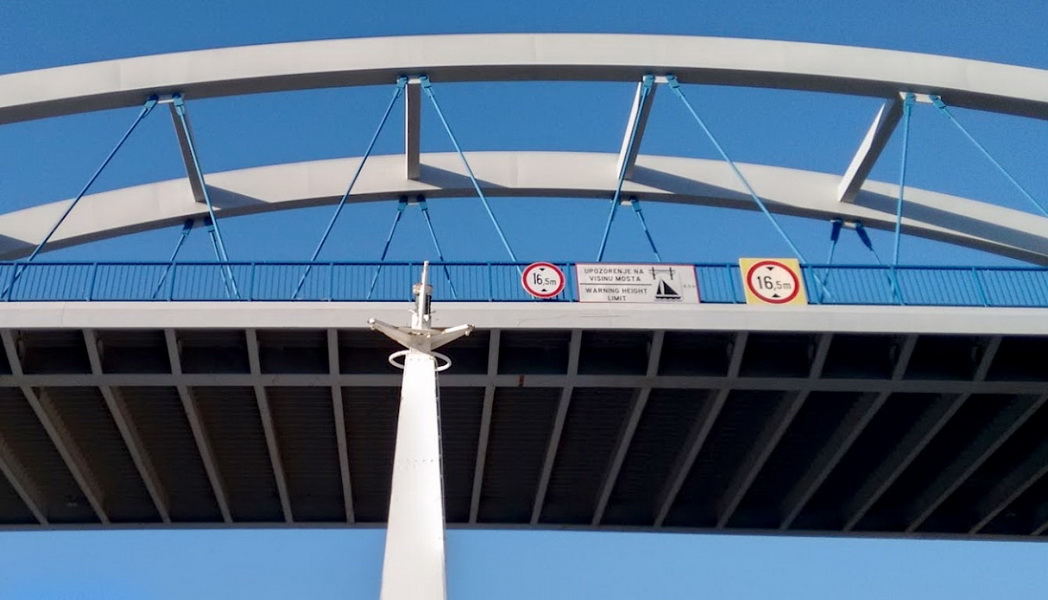 Each year, a couple of boats collide with the bridge with their sailing masts in an effort to drag the mast beneath the bridge; numerous ships are similarly destroyed. The bridge connecting Ugljan and Pašman appears to be an attraction for weekend sailors certain that they can pass beneath it and then get caught with their mast. Mostly, all our sailing boats and catamarans in Croatia that are not able to travel through the Ždrelac passage due to their size and dimensions have a warning sticker placed directly on the cockpit. In case of any doubts please consult with our base manager at the office, and he will give you first hand instructions.
As a general rule of thumb or generally accepted guideline, SAILING boats up to 38 feet are able to pass, whereby catamarans don’t follow that rule as they have much larger masts due to their specific type of construction.

The majority of sailboats at surrounding marinas that are available for yacht hire in Croatia have a sticker warning that they cannot pass under the bridge owing to the mast's height and the boat's size. This bridge is the primary route for boaters, although yachts with masts over 16.5 meters in height are not permitted to cross due to the bridge's height. Ždrelac was rebuilt 11-12 years ago and was elevated by half a meter during the rebuilding.

The bridge is 210 meters long and 16.5 meters high, and the navigable canal is designated with six pillars of red and green hue and light on nautical maps. The channel beneath the bridge is 20 meters wide and 4.3 meters deep. You should also factor in the tides and powerful sea currents that flow through that sea passage.

Warning: The sea current beneath the bridge is unpredictable in direction and can reach rates of up to 5 knots, making steering the ship fairly challenging. The maximum speed for passage is 8 knots.

Because experienced sailors are typically aware of their ship's height, How Tall Are Sailboat Masts ?

A sailboat's mast height varies according to the model. Thus, what influences the mast's height? How Tall Are Sailboat Masts? As a general rule, the mast height of a boat will be between 1.25 and 1.35 times the length of the boat, with an average of roughly 1.3 times the boat's length overall (LOA). A rig with an aspect ratio of 2.5 or less is said to have a low-aspect ratio; anything greater than that is considered to have a high-aspect-ratio. Therefore, if you rent a sailboat in Croatia, for example, a Bavaria Cruiser 41 with an average LOA of 41' feet, which is approximately 12 meters in the metric system, the Mast Height – From Waterline would be approximately 61'9′′ feet or greater, which equals = 18 meters, and the bridge is approximately 16,5 meters tall, so... this is definitely a NO GO scenario! 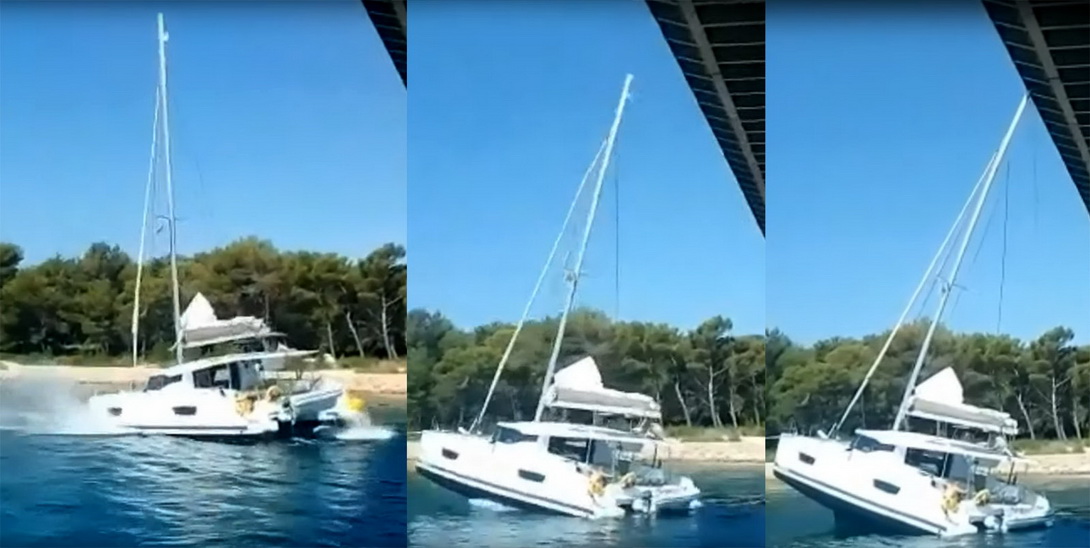 Typically, such negligence will cost the boat owners damage between 15,000 and 20,000 euros, and in addition to the guests'/clients' deposit being forfeited, the damage will almost certainly be covered by insurance, and the error will be blamed on the skipper's carelessness. Consider some previously documented instances. Consider the film of what it looked like, as well as the ones below that you may have missed previously. The following movies demonstrate some of the prior cases: