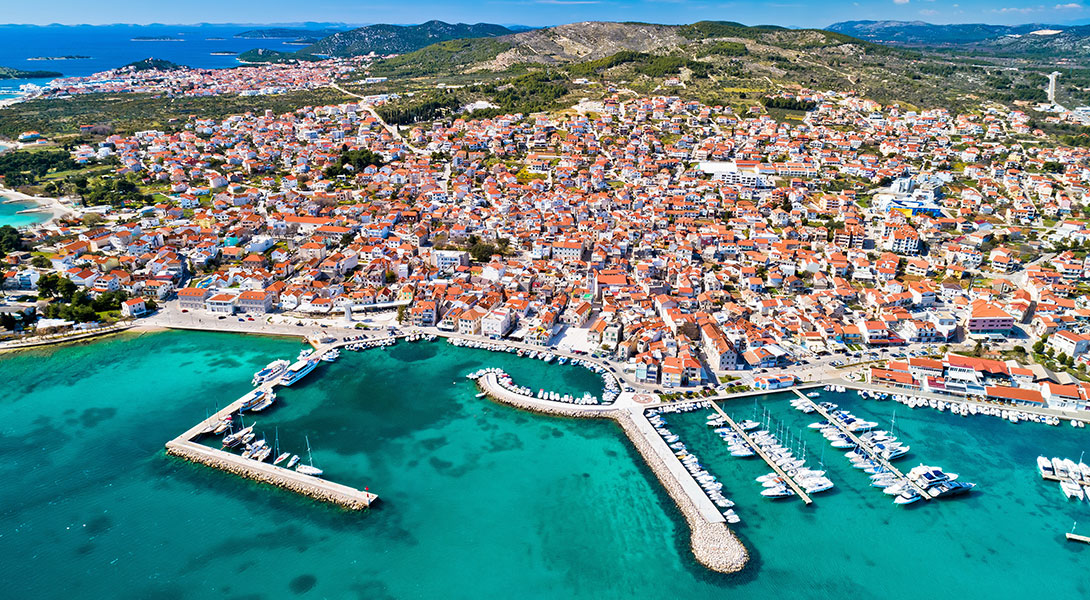 ACI Marina Vodice can be found at the city's harbor's northeastern corner, right in the city's heart. In 2017, Marina Vodice came in third place for the finest midsize Marina on the Adriatic with the "Tourist Flower – Quality for Croatia" award. Angelina Yachtcharter office is the third office in the row from the main marina reception; Angelina Yacht Charters is easy to locate.

Vodice is now the most popular summer destination on the Sibenik Riviera, drawing more than 40,000 tourists each year due to the city's steady investment in tourism infrastructure. ACI Marina Vodice is a popular choice for boaters searching for various activities, entertainment, and fun things to do while on vacation. Vodice's proximity to two international airports and the main coastal highway contributes to its popularity as a vacation resort.

With its 133-meter-tall Okit hill, the town of Vodice is immediately recognizable, as well as the town bell tower and the Punta Hotel's towering tower, which is visible from a distance at night. There is a red tower with a gallery on the breakwater head as a final touch. A stone monument in the shape of a torch is located at the north of the harbor entrance, and a lengthy breakwater built of piled stones about 100 meters east of Voce ACI Marina's entry (which is also Marina's entrance) At a distance of about 180 meters southeast of the harbor light on the breakwater, a shoal with a depth of about 1.3 meters is designated by a light (Fl G 5s 5m 2M). Only from the right side can the shoal be rounded. The shoal is denoted by an obscured section of the Vodice harbor light approaching the port at night.

The Marina offers a variety of services.

There are wells in Vodice that never run dry, even during the hottest days of summer. As evidenced by the two wells that still survive in the town center, the residents exchanged water with islanders until the 19th century. For example, the prehistoric fort of Prizba is discovered in Vodice; the Illyrian-Roman freshwater from the Romans; and the later Roman town of Arausa are all located in the area. Vodice has grown in popularity as a tourist destination in recent years, thanks largely to the addition of the ACI marina. As a result, Vodice is becoming the most popular tourist destination on the Sibenik Riviera. Vodice is an ideal destination for those seeking an active holiday, pleasure, and enjoyment: cheerful and lively during the day, charming and enchanting at night, glamorous and dazzling in the nightlife, which may go until the early hours of the morning.

Vodice: The Sibenik Riviera's tourist hub
Six hundred years of history: Vodice
Archaeological evidence suggests that Vodice was built on the site of an old Roman colony, Arausa. A 1402 Sibenik document instructing the Vodice people to pay for the construction of the Sibenik cathedral was first referenced by the name it holds today and attached to the earlier northern portion in a later stage of development. The Prizba basilica has been preserved as a Croatian cultural monument since 1971 when it was included on the UNESCO World Heritage List

Check out our special offers and discounts for yachts available for your relaxed charter vacations in ACI Marina Vodice. Contact us if you have any questions or if you’d like to take advantage of our special offer.