The Dufour 470 - WAY MORE THAN JUST A SAILING BOAT!

We present you with one of the best yachts of the year Nominees – in the category of Family cruisers, Dufour 470!

Angelina Yacht Charter has added new Dufour 470 boats to their fleet. In all, we will be launching eight new 470 boats in three distinct configurations and different layout types: 3, 4, and 5 cabins. Dufour 470, 5 cabins layout we have already had two of them in our fleet from last year, but we are debuting the three and four-cabin models this year. The 470-3 cabins do not have the same configuration, while the 4 and 5 cabins are mainly the same. More about that, we will explain in the following article in greater detail. Here's what we have available for this moment:

1x Dufour 470 - located in Sukosan Base - with 3 cabins and 2 toilets, called Stargate
- available for booking from 21.05
. Without a doubt, Stargate is the most well-equipped Dufour 470 in our fleet in terms of sailing and comfort. In addition to the two manual and two electric winches, it has the available option of a gennaker sail, and this extra gear helps to perform better at sea.
In addition, the boat will have teak wood all over the floor, meaning stern and bow, and will be equipped with two electric toilets. 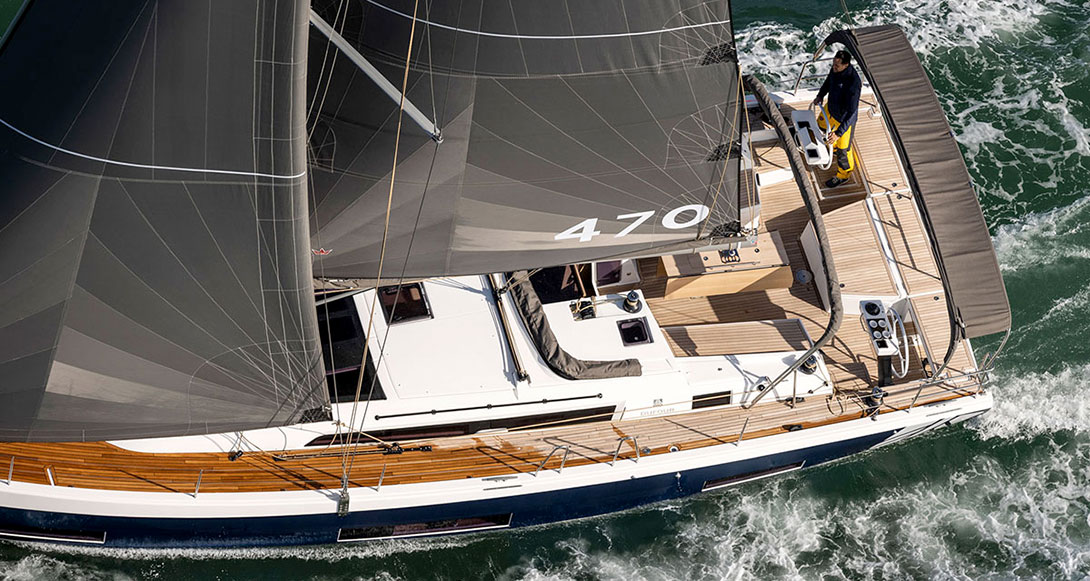 Layout and inventory list attached for the boat bellow:

1 x Dufour 470 named NN2 Located in Biograd Base - 3 cabins and 3 toilets in Biograd available for booking from 30.04. and will be equipped with two refrigerators and a carpet in the cabins and salon.

Layout and inventory list attached for the boat bellow:

will be available in Sukosan, Biograd, and Sibenik.
Next up is the Dufour 470 - a four-cabin vessel - with 4 cabins and 4 toilets configuration.

Because these are all the same boats, there is only one layout and one inventory associated with them:

will be available, Sukosan, Vodice, and Sibenik.
Next, we've got the Dufour 470 with five cabins - with 5 cabins and 3 toilets configuration.

Because these are all the same boats, there is only one layout and one inventory associated with them:

The Dufour 470 model (ALL) configurations will have Solar panels for battery recharging, air conditioning in the lounge, and a barbecue in the cockpit. So, to summarize, all of the boats come equipped by the manufacturer as an "Easy Version" with a comfort pack and an electronic sailing pack. Excluding: Stargate, which is the only one that stands out, is equipped as an Ocean Version with an Adventure pack and electric cruising pack.

For the Dufour 470, here are some basics:

Whenever Dufour's know-how is re-imagined to construct the sailing vessel of tomorrow, the result is a 47-foot boat that is both elegantly built and fast, providing unique thrills, is born out of this collaboration. The Dufour 470 blends the expertise of Dufour with the ambition to innovate on the part of the Brand. A legendary sailing boat has already been established because of its hull shape and deck configuration. The Dufour 470 has everything a sailor might want regardless of the crew size. Design improvements allow for the most efficient use of space while maintaining very comfortable sleeping quarters, resulting in a smooth sailing experience. Maneuvering this vehicle is a breeze because of its clever layout.

According to Dufour, performance yacht and mainstream cruiser designs have merged a lot. It's been a decade since yacht design took off, and the Dufour 470, for the most part, is a testament to this. The most significant advantages of contemporary boat designs are improvements to handling and comfort at sea. Because of this added form of stability, cruisers will also greatly benefit. Full bow sections above the waterline aid in lowering heel angles and increasing form stability. All sail handling is done at a pair of winches placed outboard, right before the two helm stations. This allows individuals who do not wish to join in the activity to have the full-forward portion of the cockpit to themselves. Unlike many others of its kind, this boat features just one piece of propulsion: the rudder. Dufour 470's additional beam and volume in the front areas of the boat gives an even more balanced submerged form when it is heeled over. The optional two-section Bimini allows the helmsman to view the rig and gives available headroom while entering the side deck via the convenient step provided immediately in front of the wheels.

In order to have access to the large fold-down bathing platform, which is accessible from both helm seats, both seats may be raised. This also provides access to the storage for a life raft. It's an easy choice for those who want to spend the night at anchor and barbecue on it if the swimming platform is folded down. With four persons comfortably seated around a single leaf of a table, a clean passageway may be maintained on the other side of the cockpit, even with lines being handled at the companionway. There's also a huge forward galley with plenty of counter space, deep sinks, and a roomy two-drawer Isotherm fridge.

A tiny L-shape galley separates the saloon and galley on each side of the boat. Due to Dufour 470's increased rigidity, less creaking is heard from its furnishings when it flexes over waves. This is because of Dufour 470's improved construction quality and attention to structural stiffness. A composite girder runs along the inside edge of the side decks, and a mid ship bulkhead aft of the galley is securely attached to the hull at its midpoint for further structural rigidity.

The Dufour 470 is a standout in terms of internal space. In addition, vice-free handling and outstanding stability allow for an enjoyable and safe cruising experience on this vessel.

*** Please notice that the photographs in this post are generic images taken from the Dufour Yachts website. 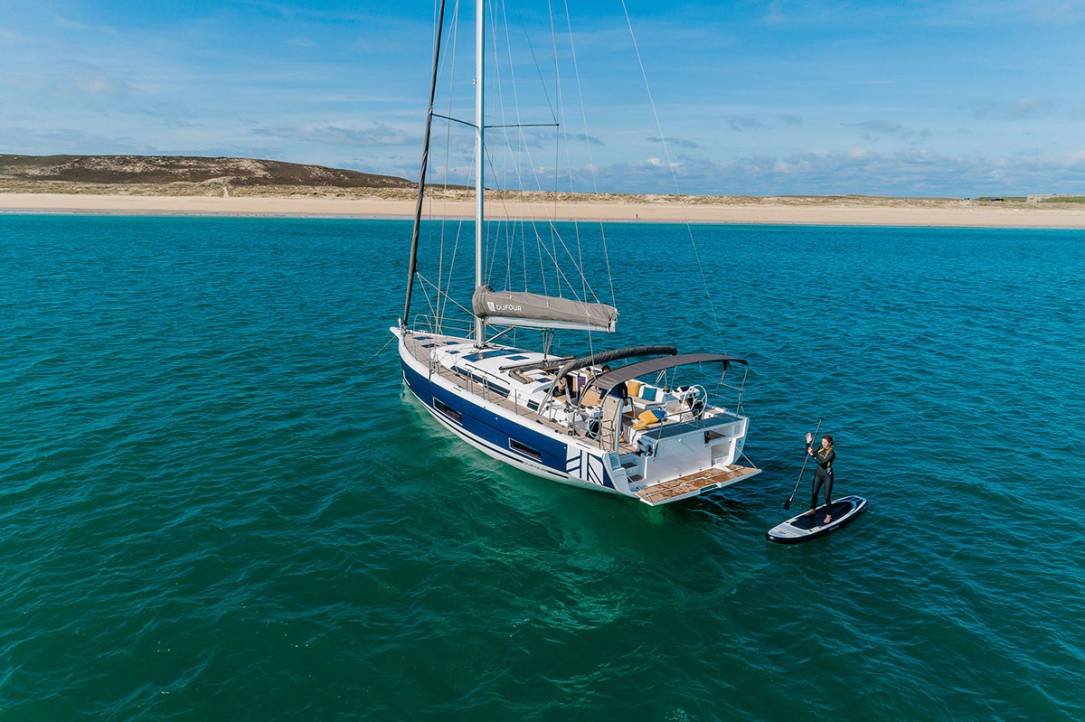 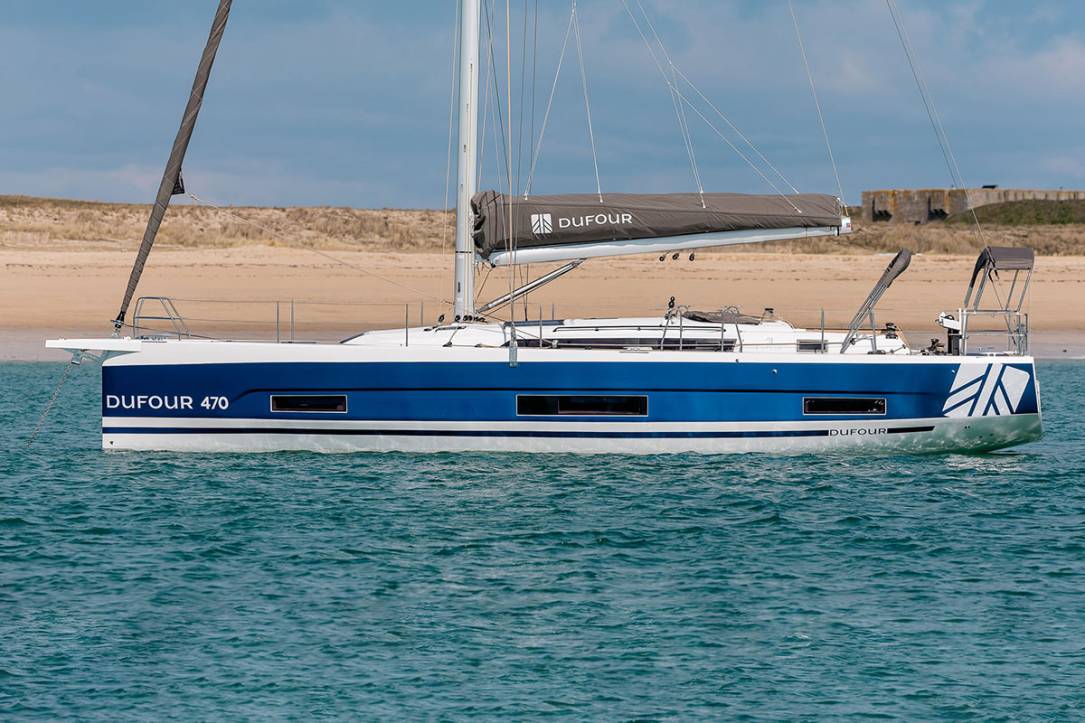 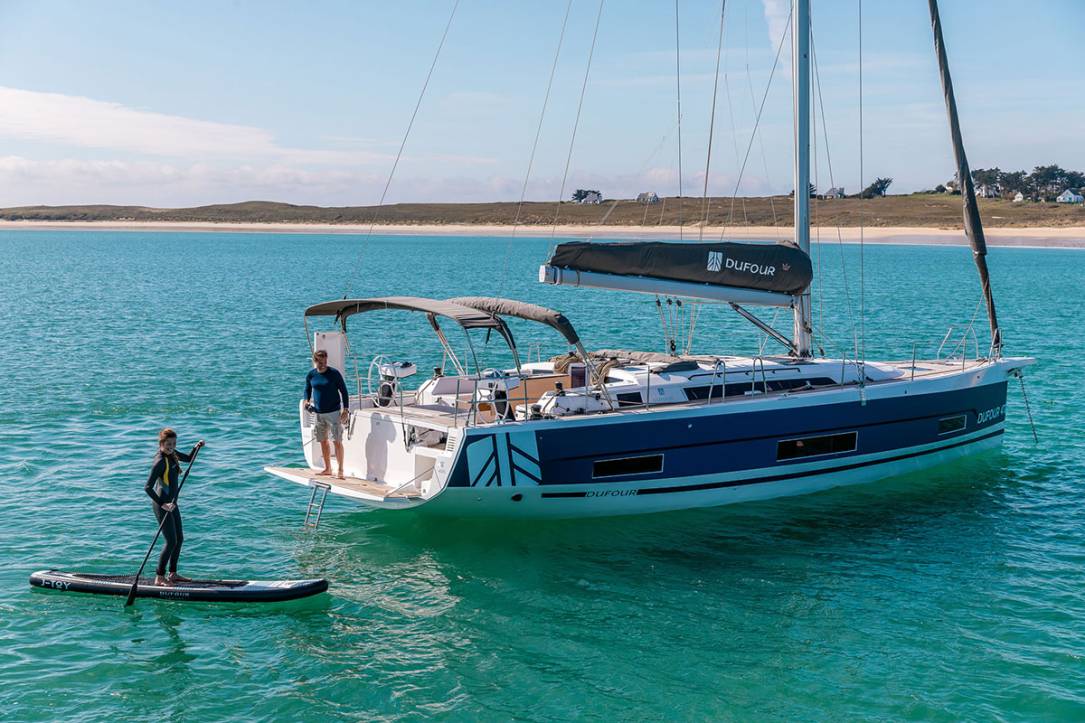 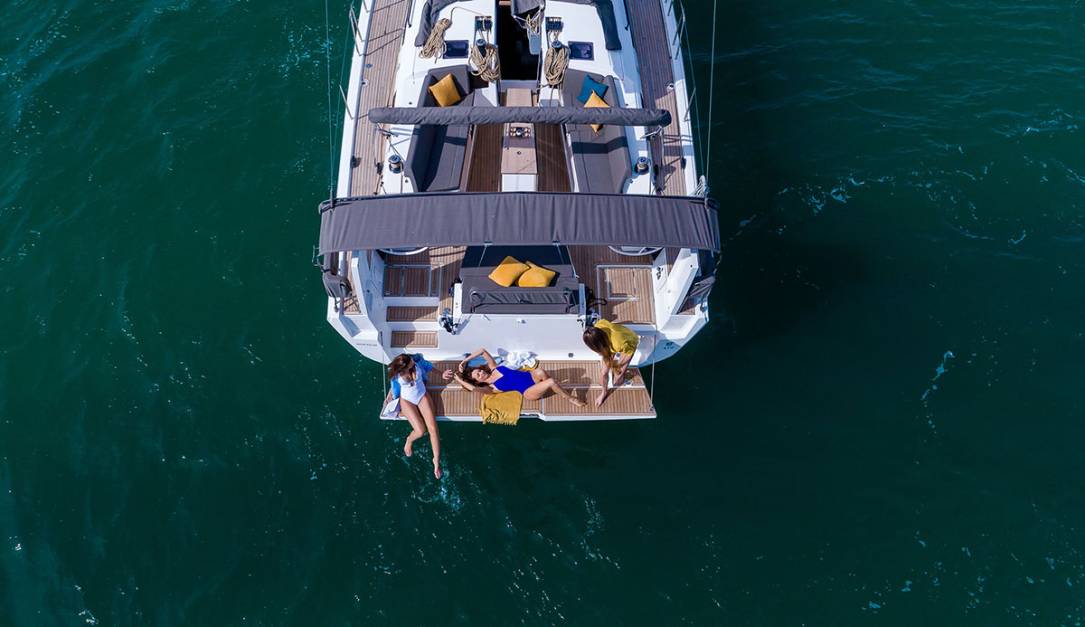 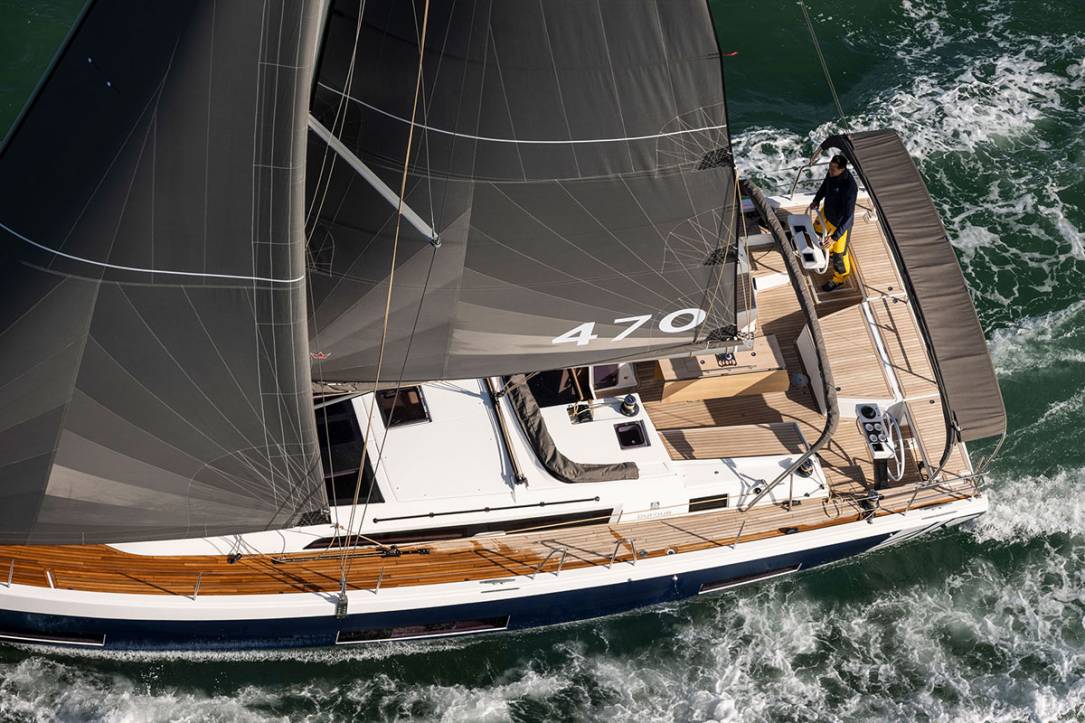 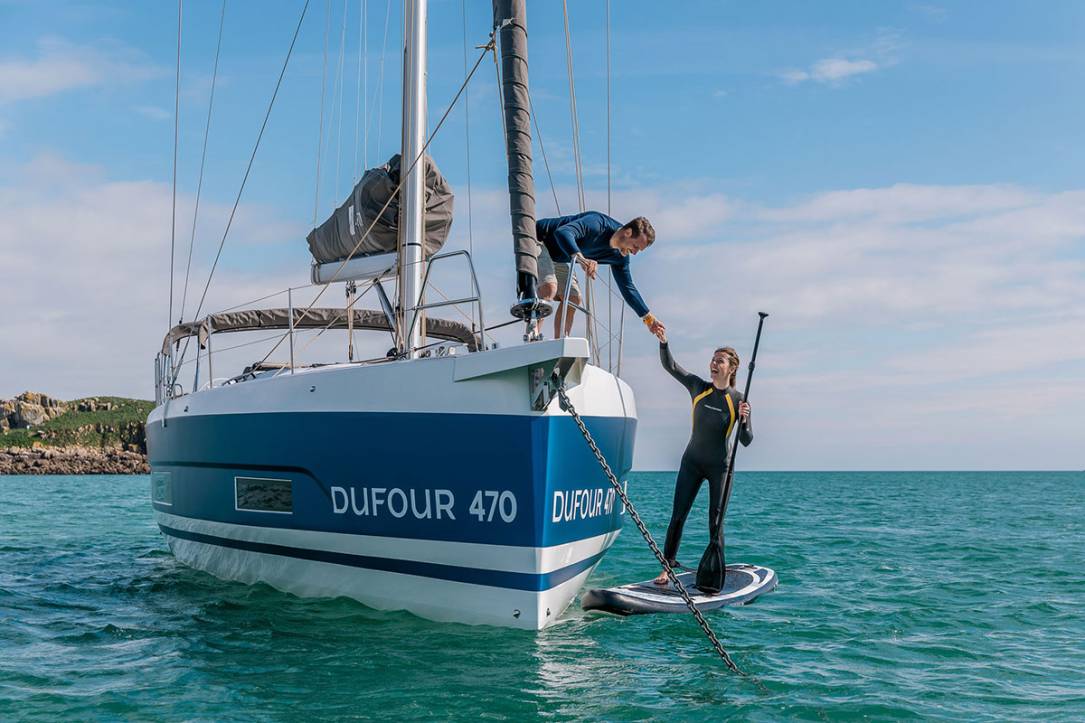 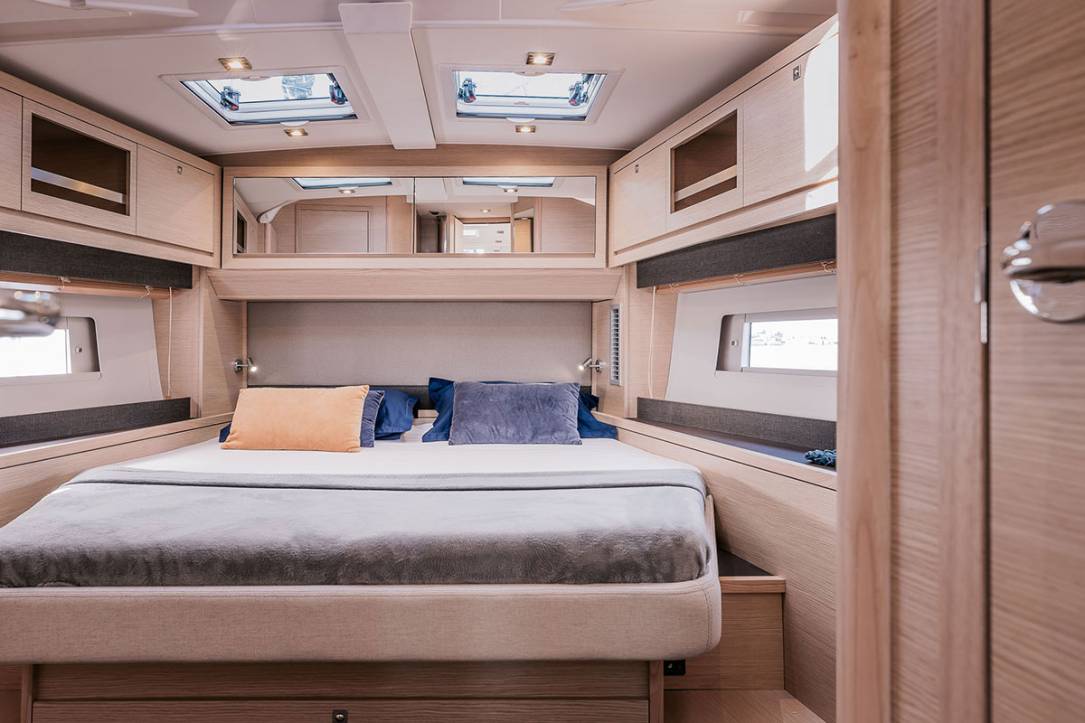 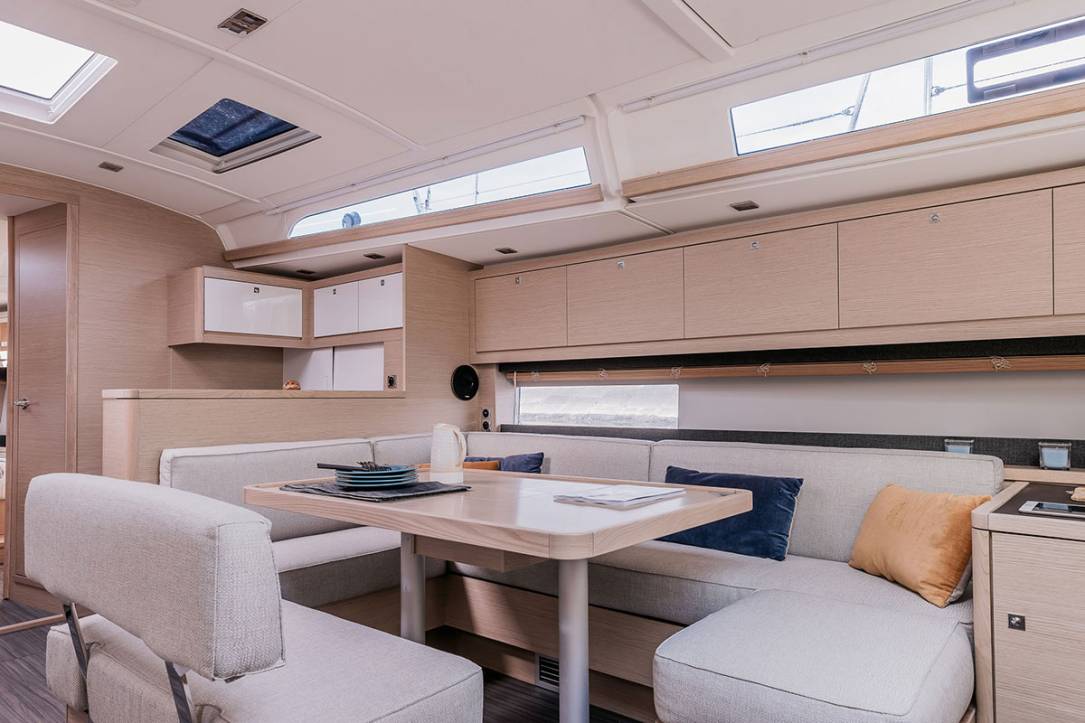 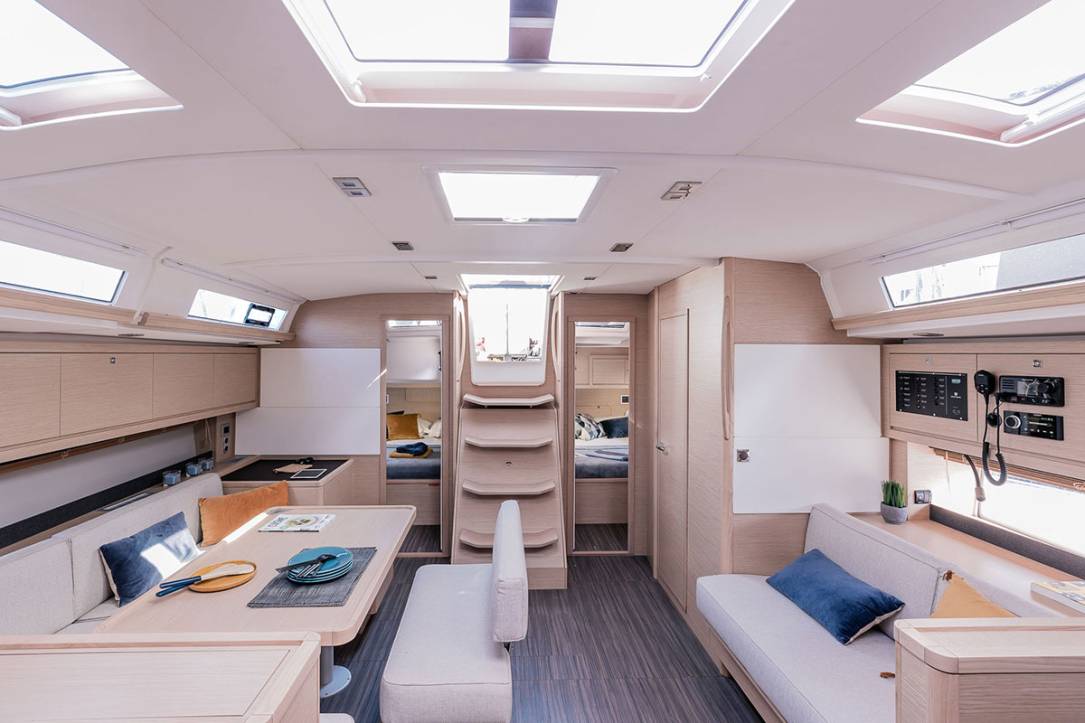 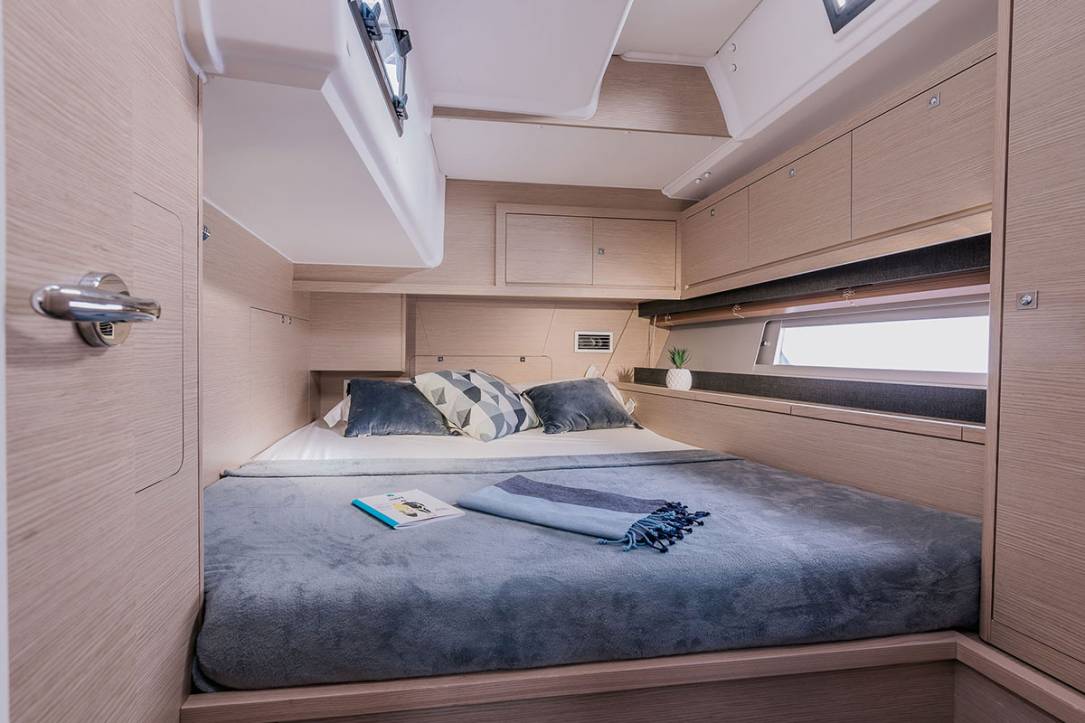 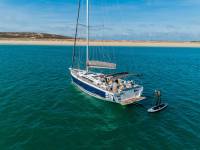 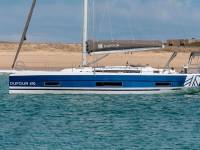 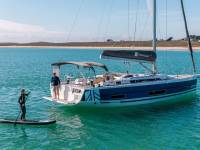 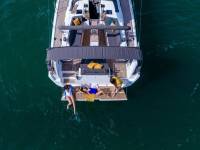 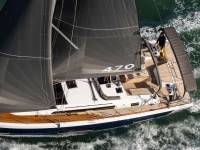 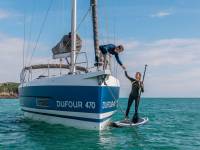 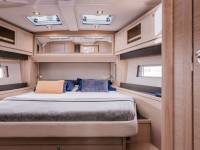 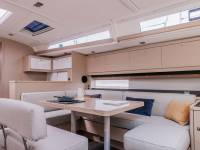 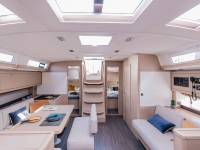 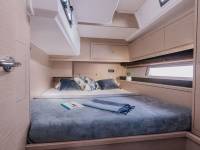