5 Best practices to avoid getting thunderstruck while Sailing in Croatia

Is it safe to be on a sailboat in a thunderstorm?

A lightning strike causes an intense high-voltage discharge, which weakens with distance from the place of impact. The damage often does not result from a direct lightning strike on the vessel. It is enough to strike in its vicinity because intense electrical discharge affects all conductors, including electrical installations and components in devices on board any boat that has electronic components. Sometimes, a distance of only a few tens of meters can be decisive. On the other hand, a fatal thunderbolt does not have to be direct. Due to a lightning strike, instruments often break down or burn out. When lightning strikes a small wooden or plastic ship, the electric discharge seeks any way down, and the human body conducts electricity perfectly. Therefore, if you find yourself in a thunderstorm and do not have protection from lightning strikes, you can minimize the danger by following simple instructions.
So, If you find yourself in a storm and do not have protection from lightning strikes, follow these simple instructions and reduce the danger.

What do you do in a sailboat during a thunderstorm?

5 Best Practices to avoid a lightning strike while sailing in Croatia:

1. FOLLOW THE FORECAST, but if you cant avoid it then:
Of course, the best option is to avoid situations in which they may occur at all. When you are at sea, always be careful to distant flashes of lightning that can appear on the horizon because you will rarely hear a thunderstorm more than five miles away from the source.  However, a dangerous storm should be avoided by yourself by finding a sheltered berth ASAP. The sound of thunder travels at a speed of one mile in five seconds, so you can calculate the storm's distance and how fast it is approaching you. For example, if you are two miles from shore, and a storm five miles at 20 miles per hour is coming toward you, you have 15 minutes to reach the shore.

2. KEEP LOW
First of all, stay in the center of the ship's cabin during storms, and if the boat doesn't have a cabin, stay low, bent over in the cockpit. Hands and feet must be within the ship's surface. Do not protrude or hang over the deck.

3. GET DRESSED, If you find yourself on an inflatable boat and can't get away in time, you can reduce the risk of lightning strikes if you get dressed because if your body is not covered with clothes, the danger of being struck by lightning is much greater. Small wooden or fiberglass ships are also dangerous because their construction does not provide automatic grounding like metal ships, where electricity is quickly discharged into the sea.

4. DO NOT TOUCH ANY METAL
Be careful not to touch the metal parts and sit or stand on a wooden base that does not conduct electricity if you are at the helm. (Metal Handles Are Dangerous In A Storm)

5. TURN OFF THE ELECTRONICS
During storms, turn off and do not touch any electronic equipment, including the radio. Pull in or remove the radio antenna or other devices protruding above the boat if they are not grounded. As much as possible, try to avoid touching any part of the ship connected to the lightning protection system. Never touch two components connected to the electrical system at the same time.

*It should be noted that deaths on the vessel due to lightning strikes are very rare, but such strikes are not uncommon. Especially in the last few years, we have been confronted with an increasing frequency of lightning strikes and more extreme weather conditions in the Adriatic due to climate change. 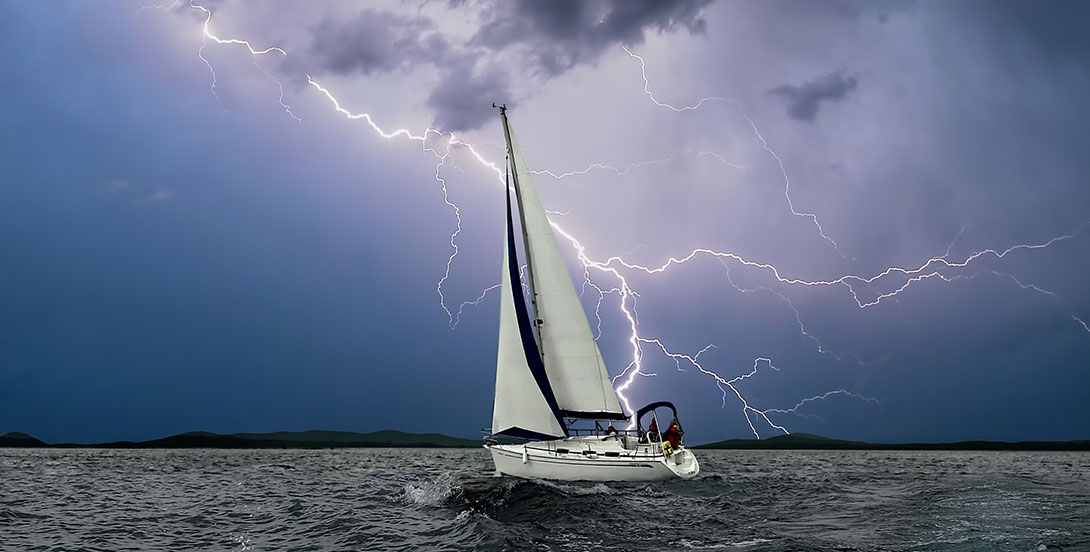 Dangerous scenarios
After hitting the boat, an electric discharge will take the most direct route to the sea, where it will scatter in all directions. Some of these scenarios can be terrible for a skipper or a crew member if they find themselves in a dangerous position. For example, lightning strikes the unconducted radio antenna on your ship. A metal antenna transmits an electric charge on the radio, and your hand is on the radio or metal attached to it; your feet are on a wet surface in contact with metal extending through the boat's hull to the columbine. In that case, your body can then become the best guide for electric charge.

UNPROTECTED outboard engine
Smaller sailboats have usually added drive using an outboard engine mounted on the stern, which can increase the crew's danger in case of thunder. The reason is that simulations show that such an engine is not inside the lightning protection zone.

Electrical circuits are sensitive
There is no absolute protection against lightning, and the path of lightning strikes is unpredictable. However, the fact is that some micro-locations attract lightning more than others.
Some indications are that such a location may have recently appeared in the port of Split, near the ACI marina in Croatia. For example, after the iron sculpture Rose of the Winds was moved less than fifty meters away, the closest vessels moored to the shore often have damage caused by lightning. See Image: 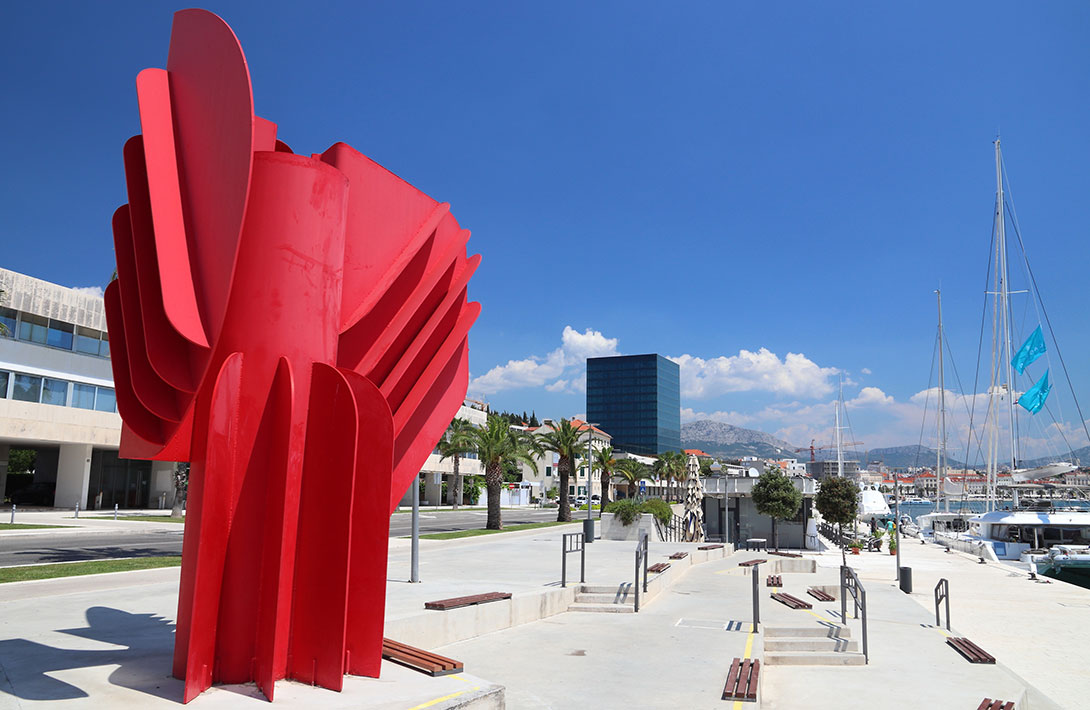 In September 2020, one of those lightning strikes happened on the four nearest large, sophisticated sailing catamarans. Complete electronics, all-electric winches and devices, and all battery sets were destroyed by those closest to them, and the total damage reached the value of several hundred thousand kunas. It is interesting that earlier, while the sculpture was in its old position, this problem never occurred. Even then, the vessels were moored in its immediate vicinity and even closer.

Near to the date February/2022, the thunderstorm that hit the Šibenik area was the most intense in the entire country. According to the thunder sensor, about 500 lightning strikes were recorded in the Šibenik that day. While on the broader region, there were more than 4,000 strikes between 6 pm and 10 pm. One lightning strike in Pirovac hit the top of the mast of an anchored sailboat, which recorded the panoramic camera in Pirovac. See the image below caught with the panoramic webcam: 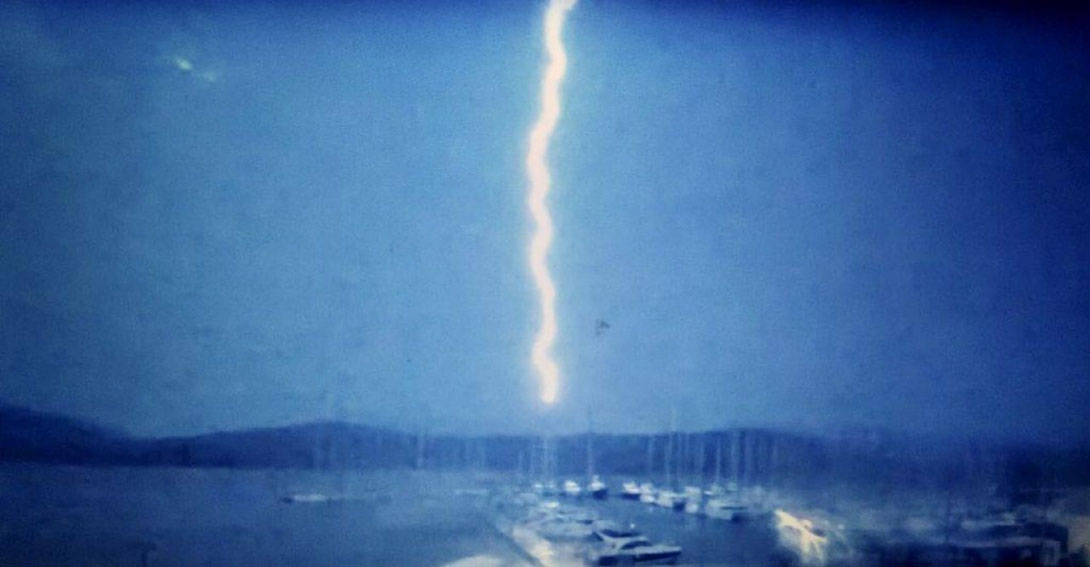 What About Lightning rods or a Lightning Conductor?

A lightning rod (US, AUS, CA) or lightning conductor (UK) is a metal rod mounted on a structure intended to protect the network from lightning strikes. The only reliable way to protect yourself from lightning strikes on a sailboat is to install a copper plate of about a square meter on the columbine. However, setting up lightning protection is not too complicated. First, it is necessary to place a metal spike on top of the mast and connect it to the sea with a guide through the mast, ground it, for which a copper cable is used. One end of the line is connected to the spike, and the other is grounded to the ship's metal hull or keel. If the formwork or keel is not made of metal, a copper plate should be placed on them, not less than half a square meter. In this case, the height of the mast gives the radius of the protected conical zone around the mast - Faraday's cage - and the people inside that zone are protected from lightning strikes. However, this is not used in sailing cruisers, as the performance weakens because the board creates high resistance, slows down the ship, and generates galvanic currents. In addition, there is no logic in putting a carbon mast and passing a cable weighing 30 kilograms through it. So, there is no quality solution to protect the sailboat from lightning.
Another problem is that if you have a lightning rod at the top of the mast and are at a berth among other sailboats without it, there is a high probability that the lightning will hit your sailboat. It's like an invitation to a lightning strike. Therefore, in Croatia, at least on sailboats up to 50 feet, it is not usual to ground the mast because it has been shown that this can cause more damage since lightning conductors attract electricity even when lightning does not strike directly at them.

SAILBOATS MAST MOVEMENT - Cone protection zone in static conditions.
The lateral tilt of the sailboat reduces the field of protection. In the summer in our marinas, many sailors are located in cruisers whose masts are constantly moving. 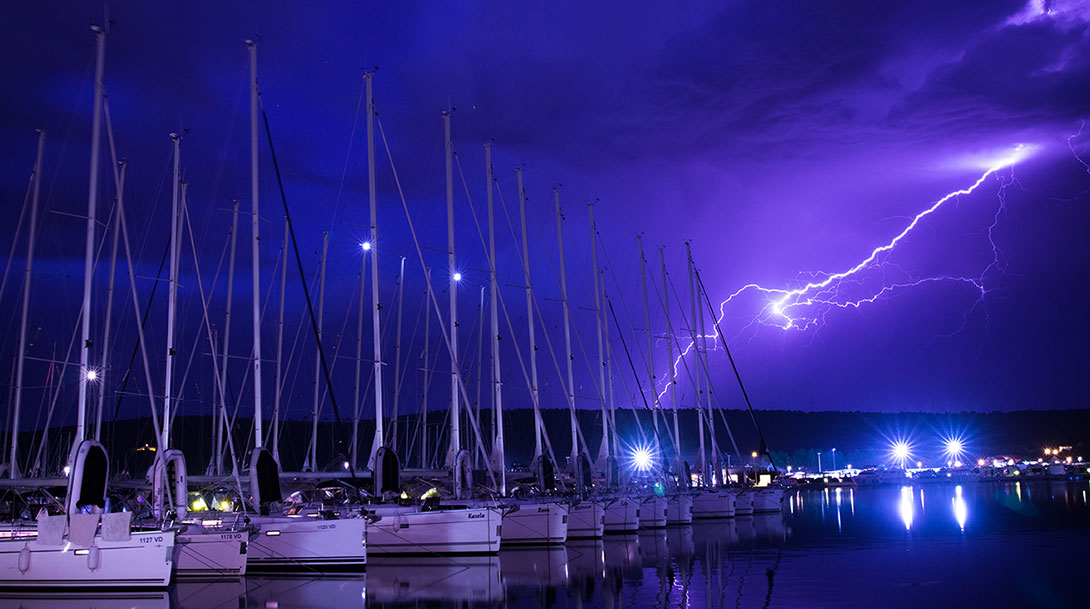 See the infographic below for a better understanding of the information provided:

Our sailors seem to adhere to the fundamental principle that the weather forecast should be closely monitored, especially the development of storm clouds - cumulus, and, at the hint of storm development, immediately take shelter in a sheltered harbor.

In Sveti Petar near Biograd in 2005, a young Czech man who was in a dinghy during a storm was killed by lightning. Driving a dinghy in a storm or rain is the most dangerous for the risk of lightning strikes.
For instance, outboard engines with many metal parts are an ideal target for discharging atmospheric electricity. However, it is hazardous if they do not have a separate steering console or if the sailor drives a dinghy holding the engine handle. 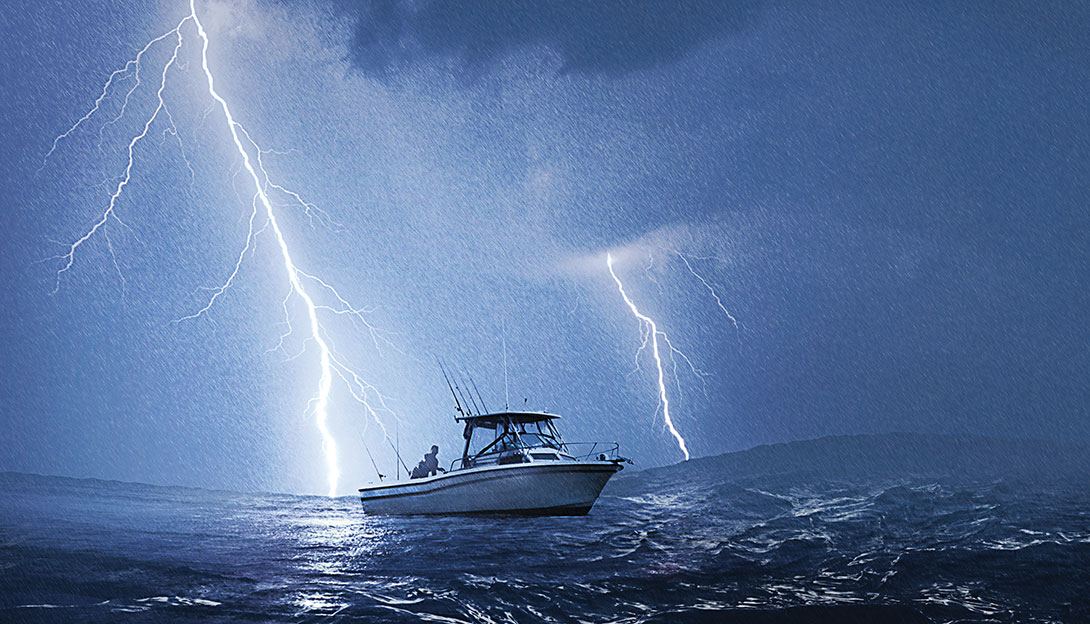 The electric potential accumulated before a lightning strike can contain over 100 million volts. The shock itself during an electric discharge transmits a current of 20 to 50 thousand amperes and generates a temperature of about 55,000 degrees Celsius. It lasts a split second but is exceptionally destructive and ultimately deadly. One blow to the ship can destroy the mast instantly, break the hull, and kill more people. Nearly 50 percent of people who suffer from lightning strikes have been to or near water, so we can say that water and lightning are a natural combination. However, one should also know that lightning can strike miles before and after an apparent storm has passed.